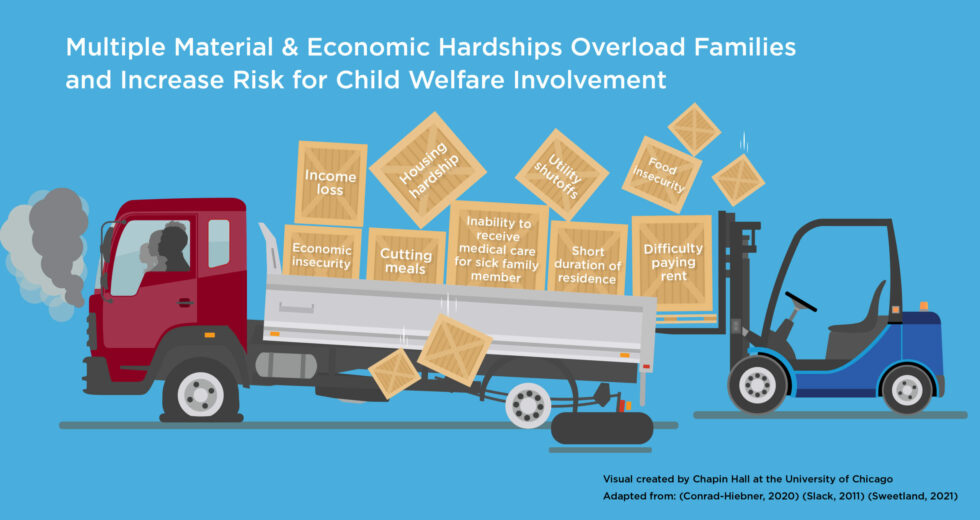 Economic stability contributes to family well-being. A growing body of evidence shows that families do better when they have access to concrete services and have economic stability. Providing economic and concrete supports is an important component of preventing child abuse and neglect and reducing involvement with child welfare. Since families of color are disproportionately affected by poverty, these supports can serve as a strategy to reduce racial disproportionality in child welfare systems.

Chapin Hall experts have brought together evidence about the connections between economic and concrete supports and involvement with child welfare. The most comprehensive collection of this research is in the presentation developed by Clare Anderson, Yasmin Grewal-Kök, Dr. Gretchen Cusick, Dr. Dana Weiner and Dr. Krista Thomas. Download it here:

View slide deck on “Family and Child Well-Being System: Economic & Concrete Supports as a Core Component”
Some compelling findings include:

These findings indicate that we can promote child and family well-being through state and federal policies that strengthen families, promote family economic security, and reduce child protective services involvement in the lives of families. Examples of state policy changes doing just this can be found in the presentation linked above.

“We are using poverty as a lens for developing a set of policies and practices that assist child welfare to decrease the disproportionate impact the child welfare system has on Black and Brown families,” said Chapin Hall Executive Director Bryan Samuels. “How many of these families, but for their economic circumstances, would not have come into the child welfare system? We want to eliminate the need for long-term foster care, and to address disproportionate outcomes based on race. The evidence is clear that addressing economic and concrete supports is key to achieving that.”

This short video provides a high-level overview of Chapin Hall’s approach to this work. The role of economic and concrete supports in transforming child welfare systems was also addressed in this report by Senior Policy Fellows Dana Weiner, Clare Anderson, and Krista Thomas.

To learn more about the range of Chapin Hall’s work on economic and concrete supports, please also see:

Coming up, Chapin Hall will continue to develop tools to practically apply this evidence to prevention efforts across the country. To work with us on applying this evidence at your agency or in your jurisdiction, contact Clare Anderson.